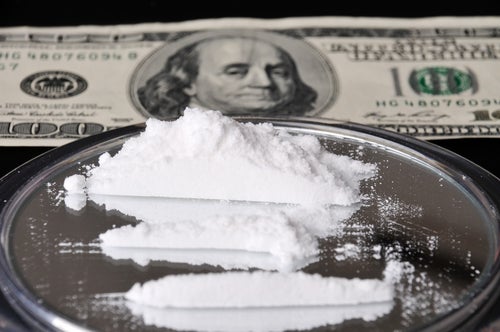 In Indiana, drug offenses cover a broad range of offenses from simple possession of a small amount of marijuana to the possession or dealing of large amounts of cocaine, heroin, methamphetamines and other drugs. Just as the range of drug offenses vary greatly, so do the penalties for drug related criminal convictions. Normally, if you are arrested with large amounts of drugs or more serious types of drugs or controlled substances, you will face tougher penalties. For example, a first time possession of marijuana charge will likely not result in any jail time and the charges could even be dismissed by way of a conditional discharge. On the other hand, depending on the particular facts of a case, a conviction for dealing cocaine or a similar controlled substance could result in as much as fifty (50) years in prison.

The good news is that just because you are arrested for drug possession or drug dealing, it does not mean that you are automatically guilty as charged. If you or someone you know has been charged with a drug offense, resist the temptation to lose all hope and agree with the police and prosecutors that you will be convicted. The police and prosecutors may present facts that make it seem like a conviction is all but guaranteed. However, for several years, Attorney Corey L. Scott, practiced exclusively in drug courts on a daily basis and knows that there is another set of facts and important questions that must be answered in every drug case. Facts and questions like: Do you have a valid motion to suppress any illegal drugs found? Do you have a valid motion to suppress any incriminating statements given to police because you were in their custody and they failed to properly advise you of your Miranda Rights? Did police ask to search your vehicle without advising you of your right to speak with an attorney or that you could deny their search request? Did the police perform a "pat down" search on you without articulating any threat to officer safety? Was there multiple individuals in a vehicle and the illegal substance was found in a common area of a car belonging to someone else? Were you stopped by police because you didn't seem to belong in the neighborhood you were in? Or were you stopped because you turned and walked away from police upon seeing them? Was the measurement of the drugs found done properly? These are just a few of the questions that Attorney Corey L. Scott will ask upon being retained to represent you.

These questions are important because the Fourth and Fifth Amendments to the United States Constitution and Article I, Section 11 of the Indiana Constitution, provide you with very important rights that cannot be violated by police officers. As such, police routinely violate the rights of people to be free from illegal searches of their cars, homes and persons. However, most people simply do not know their rights and even attorneys without extensive experience defending drug cases do not know the right questions to ask or the right motions to file to fully protect your rights and your future. Call Attorney Corey L. Scott now at (317) 634-0101, phones are answered 24 hours a day, 7 days a week, 365 days a year.

In defending drug cases, Attorney Corey L. Scott, investigates both pretrial defenses ad trial defenses. Pretrial defenses include motions to dismiss and motions to suppress evidence (illegal drugs or incriminating statements). For instance, if the police seized evidence including, computers, drugs, money, records, vehicles, etc. without a search warrant, the State of Indiana has the burden of proving that the warrantless search was valid. Also, even where police have a search warrant, there is sometimes deficiencies in the probable cause affidavit used to obtain the warrant or police sometimes fail to properly execute the warrant. Trial defenses include using the concept of constructive possession to a client's advantage. The concept of constructive possession says that when an illegal drug or controlled substance is not found in the physical possession of a person (for example, drugs found in the bathroom of an apartment shared by three roommates), then the State has the burden of proving that person charged was aware of the presence of the drug or control substance and that the person had an intention to exercise control or dominion over it.

Attorney Corey L. Scott, recently employed the concept of constructive possession in a two day jury trial in the Huntington County Superior Court. In that case, a client was charged with multiple major felonies, including Dealing and Possession of Heroin, which could have caused him to serve over 100 years in jail if convicted of all counts. The client was stopped on a traffic violation, was found to be driving on a suspended driver's license, in a subsequent search of his vehicle by police officers and K-9 police dogs, cocaine and heroin were found in a lock box attached to the underside of the client's vehicle. At trial, Corey L. Scott's theory of the case was that although the drugs were found attached to the client's car, he did not know that the drugs were there and thus had no intention to exercise control or dominion of the drugs. The prosecution argued that the drugs were in a location close to the driver side door where the client had to have known that the drugs were there and that other factors such as the amount of money he had on him at the time, pointed to the fact that he was a drug dealer. The case was tried before a jury over the course of two days. After deliberating for less than two hours, the jury found the client NOT GUILTY, he left the courtroom a free man.

Over the years, Attorney Corey L. Scott has successfully defended drug cases at every stage of a case. He has filed and successfully argued motions to suppress evidence which have lead to numerous dismissals of drug charges ranging from misdemeanors to major felonies. He has also taken drug cases to trial and won them using various defenses available in drug cases. And in situations where it is in the best interest for the client to plead guilty, Attorney Scott has successfully minimized the consequences of a drug conviction, including having felony charges reduced to misdemeanors where possible or having the charges dismissed by way of a conditional discharge.

Whether you have been charged with a misdemeanor possession of marijuana or you are facing major felony drug dealing charges, one thing is certain - a drug related conviction of any type can have a far reaching negative impact on future job opportunities, educational possibilities and can leave a permanent stain on your otherwise good name. With so much at stake, you owe it to your family, freedom and future to call an experienced drug defense attorney to protect your rights. Call Attorney Corey L. Scott now at (317) 634-0101, phones are answered 24 hours a day, 7 days a week, 365 days a year.